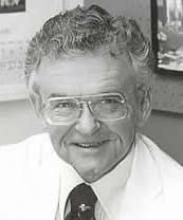 Over the course of his long career, Dr. MacQueen was a Professor of Pediatrics at the University of Iowa College of Medicine and the University of Iowa Hospitals and Clinics (UIHC). He was also director of Iowa’s public health program, the Iowa Child Health Specialty Clinics, a system of community-based multidisciplinary centers he established for children with special health care needs and their families. The program became a model for the nation.

Dr. MacQueen also served as President of both the American Academy of Pediatrics and the Association of Maternal and Child Health Programs (AMCHP), as well as serving in many Academy and AMCHP leadership positions. He was honored by his many colleagues and friends in medical academia, and the private practice and public health communities. He received a host of well deserved awards for his commitment to and outstanding achievements in improving maternal and child health services, especially services for children with special health care needs and their families. Upon learning of his death, Michael Fraser, CEO of AMCHP, said: “John MacQueen was one of our brightest and best. We were lucky to have him in our lives, and our work, and look forward to continuing his legacy and honoring his spirit in our MacQueen award lecture for many years to come. The MacQueen award is one of the highest honors we can bestow upon a maternal and child health leader.”

Dr. MacQueen became a part of the University of Iowa law school community in 1985 when the NHLP Resource Center, originally founded under the auspices of UIHC, became affiliated with the College of Law. During his later years he was not only Co-Director of the Resource Center, but also an Adjunct Professor of Law, co-teaching courses in health law and policy and alternative dispute resolution. Dr. MacQueen is remembered with affection and respect by law school faculty and staff.

Josephine Gittler, Wiley E. Rutledge Professor of Law, co-founder and co-director with Dr. MacQueen of the National Health Law and Policy Resource Center, said: “He was a truly great man and a wonderful human being. I had the honor and privilege of being his colleague and friend for almost 30 years. I feel his loss greatly and will miss him very much.”

Willard L. Boyd, Rawlings-Miller Professor of Law and President Emeritus said, “John McQueen was brilliant in mind and humane in persona. I had the good fortune to know him for 55 years and work with him for several years. He never let a problem get in the way of his sense of humor and duty. The University of Iowa is ever in his debt.”